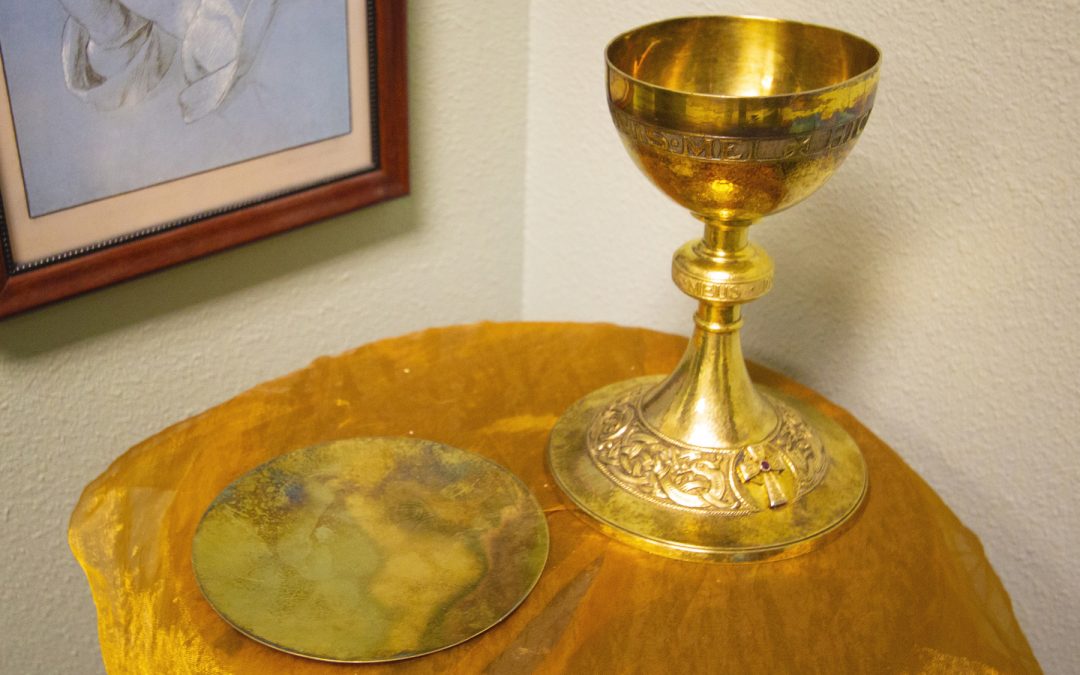 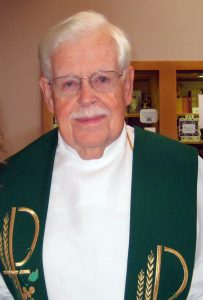 It is with great joy that we share that Father Charles Taaffe’s chalice and paten have been found. More than a decade after Father’s death, his chalice and paten set, still in its black casing, were found on Market Street in Salem. An anonymous person found the set and brought it to Bob Weber, President of Blanchet Catholic School.

Bob, who also serves as a Catholic Community Services Board Member, brought the set to the annual CCS Board Retreat the same week it was found. To the surprise and delight of all who participated in mass at the retreat, Bishop Kenneth Steiner put Father Taaffe’s newly discovered chalice to use in Holy Communion. “Father Taaffe’s presence was felt at the retreat,” said Bob. “It was such an auspicious start to the planning process for the next CCS Strategic Plan.”

With the blessing of Father Taaffe’s cousins Pat, Rita and Ann, the chalice now resides in the Blanchet School chapel. Father Taaffe, who loved all things Irish, was given the honor of naming the chapel during his lifetime. He named it the Chapel of St. Patrick.

The chalice and paten set was a gift from Father Taaffe’s parents, and they presented it to him on the day of his ordination. His parents included a personalized engraving on the bottom of the chalice.

“The chalice is a shared treasure for both CCS and Blanchet,” said Bob. “Both organizations are honored to share in the legacy of the late, beloved Father Taaffe.”

Reverend Monsignor Charles Taaffe, born in 1927 and passed July 5, 2008, touched the Salem and Keizer communities in many ways. Most of us remember him as the founder and namesake of Father Taaffe Homes – a resource dedicated to helping young moms who make the brave decision to say yes to life. He was a man who cared deeply about his community and served selflessly. We at CCS continue to champion his legacy through the Father Taaffe Homes and pregnancy resource program which he founded and opened on St. Patrick’s Day, 1975. The program continues to be fully sustained through the generosity of caring donors.

A special thanks to Fr. Gary Zerr, pastor of St. Edward Catholic Church in Keizer, who had the items professionally polished and restored to their original beauty for future masses.