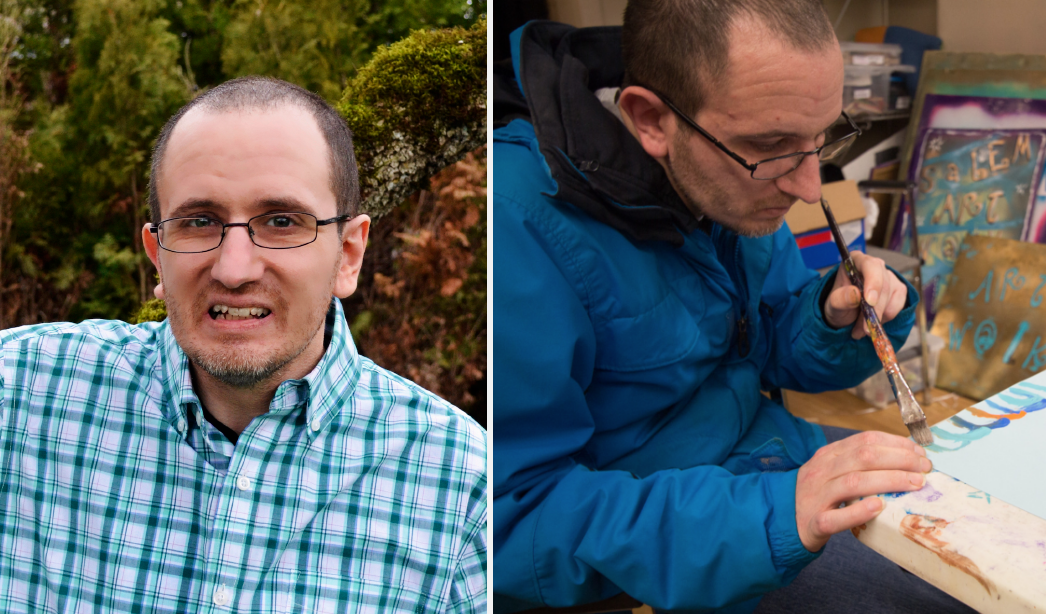 Brian was born with intellectual and developmental disabilities. He wasn’t officially diagnosed with autism until he was a teenager but, growing up, Brian’s mom knew that he was different.

Being different can be a good thing. Brian’s family knew that he was gifted. He always loved art and his family encouraged him to pursue his passions.

Brian views the world a little bit differently and despite the many challenges he faced as a child with autism, he sees the beauty in everything. Brian’s art is his way of sharing his vision with the world.

Now, you can personally see his art, as Brian is the featured artist for February at the Prisms Gallery in Salem.

“Many doors to the art world have opened for Brian since he began working with Janet Reese, a local artist. He has learned a lot about abstract art and using different tools other than just a brush to create,” Chrysalis White, Brian’s house manager, said. “Brian finds art to be very calming and it helps him cope with daily life. Brian has become stronger this last year as both an artist and an individual.”

Brian’s dad, Bob, was a maintenance painter by day and a cartoon artist by night. Though Bob passed away when Brian was young, Brian remembers watching his dad sketch after a long day at work. Brian’s dad was his artistic inspiration, and when he works on his own pieces now, he believes his dad is with him in spirit, encouraging him to pursue his dreams.

“Brian is very proud of his art and hopes those who gaze upon it appreciate the hard work he puts into his creations,” Chrysalis said.

You can check out Brian’s work at the Prisms Gallery at the Reed Opera House, 189 Liberty Street in downtown Salem. His work will be featured until February 28th.