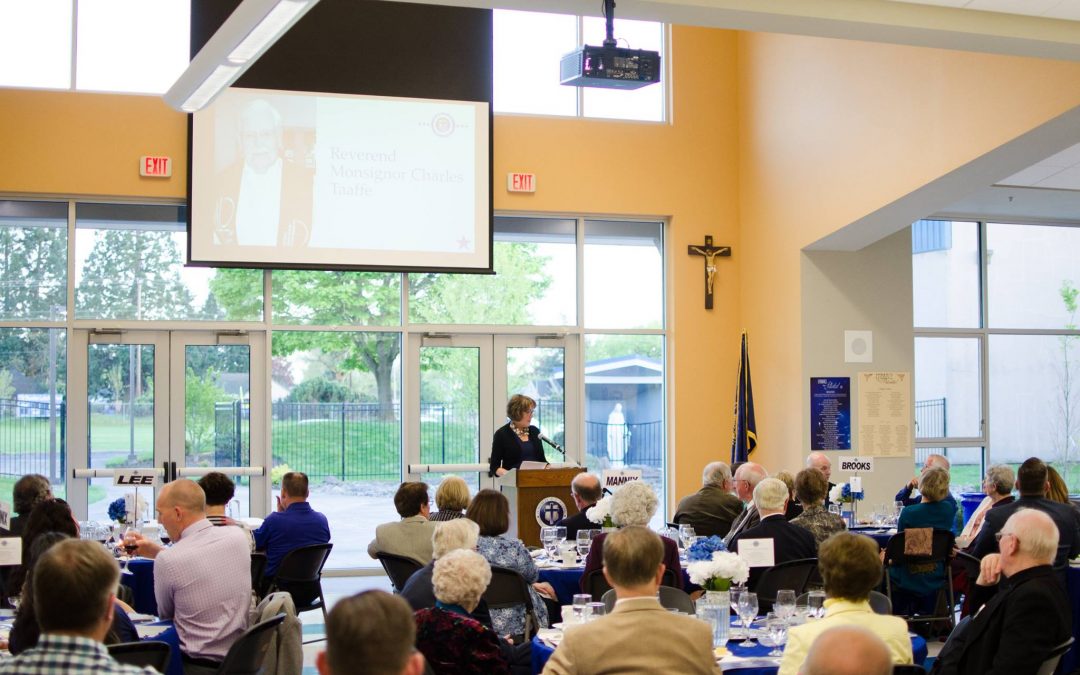 On Friday, April 28th, Blanchet Catholic School inducted six new members into its Hall of Fame. The school holds a Hall of Fame Ceremony every year to recognize and remember successful alumni and community members who have given back to Blanchet Catholic School. This year’s new inductees are Monsignor Charles Taaff, Richard Kreitzberg, Bill Broosk, Patrick Grainer, Charles Lee, and Kevin Mannix.

Catholic Community Services Foundation Board President, Lynda Harrington, accepted on behalf of Father Taaffe, who passed away in 2008. Father Taaffe served as the honorary pastor of Blanchet and served on its board of directors. The school dedicated its campus chapel, the Chapel of St. Patrick, in honor of him.  Father Taaffe opened Father Taaffe Homes to provide a safe, stable, nurturing place for young mothers to raise their children, and upon his passing gifted the ministry to Catholic Community Services. His life’s work and his contributions to the school were honored at the ceremony.

Dick Kreitzberg was also inducted into the Blanchet Hall of Fame. After years spent as a successful naval officer and business man, Dick and his wife Joanna have made it their mission to take care of their community. Dick and Joanna are generous supporters of several local non-profits, including CCS. Dick is the honorary chair of the Father Taaffe Homes St. Monica Apartments Capital Campaign.

CCS was honored to be part of Blanchet’s Hall of Fame, and to help them celebrate members of our community who have made an impact.